As some of you know, I’ve been fired. Well that’s not entirely true. The boat that I’m working on has let me go because I’m a lazy slob. No, that’s not quite true either. As the boat is going to be sailing across the Atlantic and then the Pacific and with me being a diabetic and all that nonsense they were forced to look for someone else. Exactly the opposite of what the Captain said when he met me for the first time. So my adventures on M/Y Shandor have ended. The 1st Mate hoped that they would not find someone so that I could stay on, but alas that did not happen (or is it did happen?).

Actually I’m quite pleased as I was getting tired of cleaning the same things twice each day and I know that more adventures are waiting for me. I’m taking one day at a time and enjoying each moment.

I’ve experienced loads of wonderful things, learnt new skills and met all kinds of interesting people (some of whom I’ll remain in contact with, others quickly forgotten).
I’ve seen plenty of sea and seen how the rich enjoy themselves. I’ve cleaned like I’ve never cleaned before. I’ve scrubbed decks, polished brass, cleaned windows, washed down tenders, covered cushions, uncovered cushions, put up umbrellas, raised anchors, plotted the course on the charts, inflated large fenders, talked nonsense, laughed with the engineers, drunk expensive champagne with the chef, told dirty jokes to the 1st Mate, worked 20 hours a day, drunk plenty of coffee, slept through the day, operated the onboard crane, used rock climbing skills to clean windows, eaten well and really just had a blast. Also being the highest paid deck hand helped. 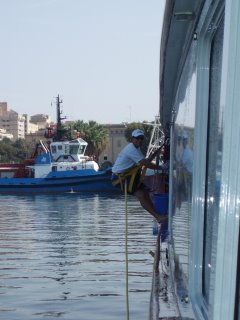 The last three weeks the boat has been in Genoa moored at a yard where a number of repairs and alterations were being carried out. The bar was extended, the interior saloon got new granite tops, the tenders were repaired, the sailboat was sold and replaced with a bigger one, and Tom and I replaced the corking on the sundeck. Also many replacement crew interviews where held.

The corking is the black line that seals and runs between the wooden deck planks. As the deck wears down (from the continual cleaning – scrubbing) ridges are formed that leave the deck very uncomfortable underfoot. We sanded the whole deck and found that in many places we had to replace the corking as it had been sanded away. This meant that the seams had to be routed out and then refilled with a black silicone type substance and when dry sanded to a smooth flat finish. Sounds easy. Sanding the decks took a week, routing out the seams took ten days and filling the seams with silicone took almost a week and because of all the other activity on deck (new bar extension) we never got to even start the key areas, but hey I’m not there anymore. It’s messy backbreaking work, but makes a wonderful change from cleaning. 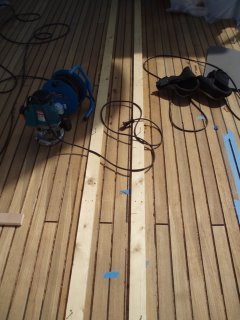 The cost of the job if done by the yard – 50 000 Euros. Done by deckhands on daily wage 6720 Euros a saving of 43 280 Euros. Hmm. The good news is that we are now experts at re-corking decks and will be advertising our services to the yachting community in the near future. 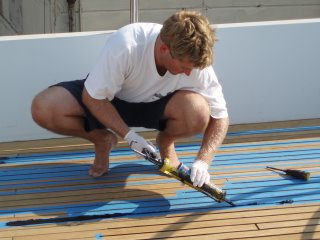 The last Friday I worked we had a huge party, or was it Thursday, the days just sort of blend into each other. All the crew went out to a really fancy restaurant in Genoa called Garibaldis. Apparently Garibaldi is famous for something in Italy as there are lots of streets named after him. The restaurant used to be his house and there are portraits of him hanging around the place. Really excellent food, service and wine. See footnote 1. It was a wonderful evening and I did not have to pay one Euro cent. Although work the next day was a little difficult as we ended up at some bar drinking b52’s till the early hours of the morning and having to walk back home in the rain. 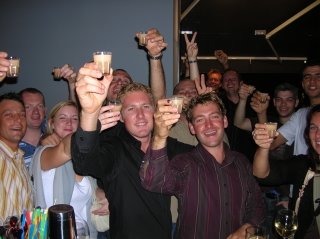 Now that I’ve been paid I’m off to Paris to spend a weekend with my family. Should be fun. Then it’s on board the Carnival Liberty (Margot’s ship) for an almost free twelve-day cruise around Italy, Croatia, France and Spain. Now that’s going to be fun!

Footnote 1: Garibaldi, Giuseppe (1807–82), Italian patriot and military leader of the Risorgimento (unification of Italy). With his volunteer force of “Red Shirts,” he captured Sicily and southern Italy from the Austrians in 1860–61, thereby playing a key role in the establishment of a united kingdom of Italy. From Apple Computer Dictionary. 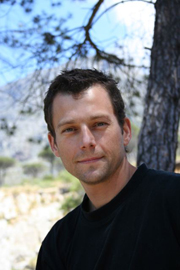